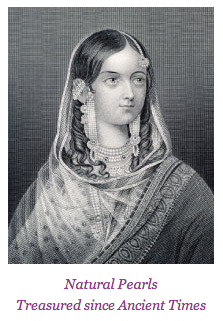 Since ancient times, the pearl has endured as a symbol of unblemished perfection, and it has inspired awe, appreciation, and wonder in those who behold it. The Latin word for "pearl" is "margarita", which means "that which is precious or excellent". The name itself represents the pearl's singular beauty.

The world's oldest pearl - the "Abu Dhabi Pearl" - dates back 8,000 years to the Neolithic period and was discovered in 2017 on Marawah Island, off the coast of Abu Dhabi. Experts believe that this pink pearl is proof that the early Neolithic people engaged in pearl trading. It played an integral role in their daily activities and supported their livelihood.

For many centuries, pearls were considered one of the world's most precious natural materials. Cultures from all over the world - including Romans, Egyptians, Chinese, Indians, Greeks, and Europeans - have all assigned great value to pearls, which have been given as gifts as early as 2300 BC. As an example, freshwater pearls from China’s Huai River were the preferred gift for Chinese royalty.

Pearls were first worn as meaningful jewelry adornment as early as 420 BC. A sarcophagus of a Persian princess now on display at the Louvre wears a fragment of pearl jewelry from that early time. Pearl jewelry was also a major status symbol in Ancient Rome, so much so that Julius Caesar passed a law prohibiting non-royals from wearing pearls. At the peak of the Roman Empire, when the desire for pearls reached its height, the Roman general Vitellius sold one of his mother’s pearl earrings and was able to use the money to finance an entire military campaign. Fortunately, he won the battle. The Greeks also loved their pearl jewelry, especially for weddings. If you visit The Met Fifth Avenue today, you can view the “Pearl and gold necklace with pendant of Eros” from 330–300 B.C.

The most impressive pearls throughout history

Over time, a few striking pearls have emerged as some of the most impressive and breathtaking specimens. La Peregrina - one of the most famous pearls in the world - was the largest pear-shaped pearl ever found when it was first discovered. Even though the 55.95-carat pearl had to be cleaned and drilled to secure it to its setting, La Peregrina is still one of the biggest, perfectly-symmetrical, pear-shaped pearls in existence. It has been possessed by Spanish, French, and English kings and queens, and in 1969, Richard Burton bought La Peregrina for Elizabeth Taylor as a sentimental jewelry gift. The pearl sold for a record price of more than $11 million at auction in 2011.

Another memorable pearl is The Hope Pearl, which was once owned by Henry Philip Hope, a 19th-century gem collector who had more than 150 natural pearls in his collection. The Hope Pearl is one of the largest saltwater pearls in the world, weighing in at approximately four ounces. It's currently housed in the British Museum of Natural History.

Discovered off the coast of California in 1990 by a diver, The Big Pink Pearl - at 470 carats - once held the Guinness World Record for “Largest Abalone Pearl” in the world. The lucky diver still possesses that pearl, which is valued at $4.7 million. These are just a few of many memorable pearls that have secured their place in history. 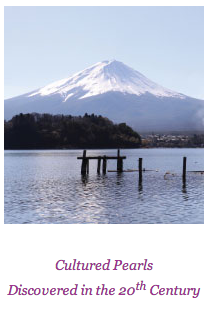 Cultures throughout time have not only prized pearls, but they've also created many myths involving pearls and have assigned great meaning to them. Some of the myths associated with pearls feel larger than life.

For example, during the 1st century B.C., famed Egyptian Queen Cleopatra once bet Marc Antony that she could host the most expensive dinner in history. In her attempt to impress Antony, she crushed a large pearl from one of her earrings and dissolved it in a goblet of wine before drinking it. At the time, pearls were considered the pinnacle of luxury and wealth, and Antony was stunned by Cleopatra’s bold gesture.

In the Hindu faith, pearls are often associated with Krishna, the most popular god of Hindu worship. One legend says that Krishna plucked the first pearl out of the sea to give to his daughter Pandaia on her wedding day. In addition, an ancient Indian epic called the “Ramayana” mentions a necklace of 27 pearls, which is given to the Hindu god Hanuman as a reward for his heroism.

Due to the milky color of some pearls, they are often associated with the moon. In ancient Vedic texts, pearls are considered the "daughter" of the moon. Pearls are also connected to water, since they originate in bodies of water like oceans. Some cultures actually believe that pearls are tears shed by the gods, and the goddess of love Venus, who was born from the sea, is commonly associated with pearls.

Overall, pearls are thought to be protective talismans, and people who believe in the healing properties of gemstones wear pearls for safety and security. A pearl can be a great, meaningful gift for someone who needs a boost of inner confidence and encouragement.

Coinciding with the discovery of pearls in Central and South America in the 15th and 16th centuries and an increased demand for pearls in Western Europe, the Pearl Age was a time when all stylish women who could afford pearls were wearing them. The royals and other members of elite society - including Elizabeth I and Marie de’Medici - were practically drenched in pearls.

Eventually, the demand for pearl jewelry became so overwhelming that oyster supplies were compromised. In the 1800s, pearls were found in the Mississippi River, but opportunistic people eager to collect pearls killed millions of mussels, completely decimating the natural resources. As a result of this increased demand and the reckless acquisition of natural pearls, pearl jewelry became difficult to manufacture.

In response to the pearl shortage in the late 1800s and early 1900s, Japanese researchers created an innovative method for farming pearls, which launched the cultured pearl industry and met the continued demand for pearls. Kokichi Mikimoto developed a strategy that enticed oysters to produce pearls on demand.

Pearl culturing is the process of creating an environment that encourages natural oysters to yield pearls. The pearl culturing technique itself consists of implanting a piece of an oyster’s mantle tissue into the silky wall lining of another oyster. The oyster’s reaction to this implanted tissue is to soothe the irritant by releasing a milky substance known as nacre. Layer upon layer, after several years, the nacre becomes a beautiful pearl.

Mikimoto's efforts were directly responsible for the development of cultured Akoya pearls, otherwise known as saltwater pearls. Originally native to Japan, they are among the most beautiful and expensive due to their perfect roundness and beautiful color.

Although there are over 100,000 species of oyster, only a very small number of oysters are actually capable of developing a pearl. Today, natural pearls are rare and valuable, so a gift of a single pearl necklace can make a lasting impression.

Where are pearls found today? The answer depends on the type of pearl. Due to the overharvesting that occurred in the 1800s, many natural pearl beds were destroyed, so natural saltwater pearls are not as easy to find as they once were.

Until the 1950s, the Arabian Gulf was the world's primary source of natural pearls. Young men from port towns like Manama, Doha, Dubai and Abu Dhabi would depart on pearling boats to the coastal banks where the pearls could be found. Natural saltwater pearls have also been sourced from the Red Sea, the Gulf of Mannar, Baja California, Venezuela, and Myanmar.

Today, saltwater cultured pearls - like Akoya, Tahitian, and South Sea - require the optimal conditions along with time and patience to cultivate. Akoya cultured pearls are grown predominantly in Japan. Cultured pearl farming was actually first commercialized in Ago Bay, Japan before it spread throughout the world. A typical Japanese pearl farm in Ago Bay includes both on-shore and off-shore components, and racks of pearl oysters hang at depths between 30 and 50 feet for a two-year culturing period.

The Tahitian pearl is another kind of saltwater cultured pearl that's grown in the Pinctada margaritifera oyster, which is native to French Polynesia but is also farmed in the Cook Islands, Fiji, Australia, and New Zealand. This pearl gets its name from the fact that it's primarily cultivated near the islands surrounding Tahiti.

South Sea cultured pearls are farmed in Australia, Burma, the Philippines, and Indonesia. In many cases, the oysters themselves are handpicked from the wild and then cultivated on a farm. The majority of white-colored South Sea pearls are cultured along the northwest coast of Australia, home to the Kimberley and Pilbara regions. Golden South Sea pearls, on the other hand, are farmed primarily in the Philippines and Indonesia. In the Philippines, most pearl farming activity is located on the island of Palawan. In Indonesia, pearl farming is a lucrative business for farmers in the country's remote far east.

The majority of cultured freshwater pearls are produced in China. There, the "pearl village" Liusa Village boasts 2541 pearl farms, and output from this one village alone accounts for half of the total pearl output of China.

The future of pearls

Even though pearls can currently be cultivated in a number of places throughout the world, the future of pearls requires great attention to factors like climate change, disease, and pollution - and not necessarily overharvesting. Just like natural gas, iron, and coal, oysters are natural resources that are affected by shifts in the environment.

In 2007, a number of industry leaders at the World Jewellery Confederation's annual conference voiced their support for the Kyoto Protocol, an important agreement mandating that industrialized nations cut their carbon emissions. But since that conference, little has been done to specifically identify how climate change is affecting pearl oysters. Unfortunately, the pearl industry hasn't invested much money into research and development, since the process of culturing oysters is straightforward and hasn't changed for hundreds of years.

However, pearl farmers worldwide are observing the effects of climate change on their oysters. In warmer waters, pearls grow more quickly, and their rapid growth reduces the quality of the pearl. Tropical waters have become saltier over the past four decades, and salinity has been shown to directly impact the growth rate of pearl oysters. In addition, saltwater pearl farmers in particular are affected by tropical storms, which are becoming more frequent and intense, likely due to climate change. On a farm, as opposed to in the wild, oysters are more vulnerable to natural elements.

Anyone who enjoys Akoya pearl necklaces and other cultured pearl jewelry, especially from saltwater sources, needs to be aware of climate change and how it's affecting the world's oyster populations. By reducing their carbon footprint, switching to sustainable, clean energy, and supporting organizations that promote sustainable initiatives, all people can help ensure that oysters and pearls will continue to be available for many years to come.