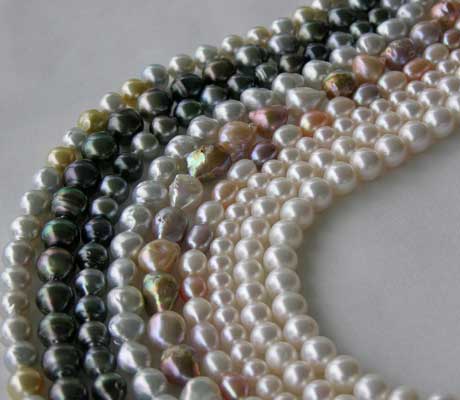 Throughout history, the pearl has been one of the most highly-prized and sought-after gems, frequently used in meaningful jewelry pieces.

The ancient Egyptians prized pearls so much they went to their graves with them. Cleopatra reportedly dissolved single pearls in a glass of wine and drank it, simply to win a bet with Mark Antony that she could consume the wealth of an entire nation in just one meal. Pearls were a major status symbol in Ancient Rome, so much so that Julius Caesar passed a law that prohibited non-royals from wearing pearls.

Coinciding with the discovery of pearls in Central and South America in the 15th and 16th centuries and an increased demand for pearls in Western Europe, the Pearl Age was a time when all people who could afford pearls were wearing them. Royals and other elites like Elizabeth I and Marie de'Medici were practically drenched in pearls.

Over time, the demand for pearl jewelry became so great that oyster supplies were unsurprisingly compromised. In the 1800s, pearls were even found in the Mississippi River, but so many mussels were destroyed by people eager to collect pearls that the natural resources were depleted.

As a result, natural pearls became even more scarce. To compensate for the loss, Japanese researchers in the late 1800s and early 1900s created an innovative method for farming pearls and started the cultured pearl industry. Natural pearls remained accessible only to the rich and famous. To put that in perspective, in 1916, famed French jeweler Jacques Cartier even bought his landmark store on New York's famous Fifth Avenue by trading two natural pearl necklaces for the valuable property.

All that being said, cultured pearls - including Akoya, South Sea, Tahitian and freshwater pearls - have grown in popularity and value over the years. These alternative pearl types can be just as desirable as natural pearls. Keep reading to learn more about them. 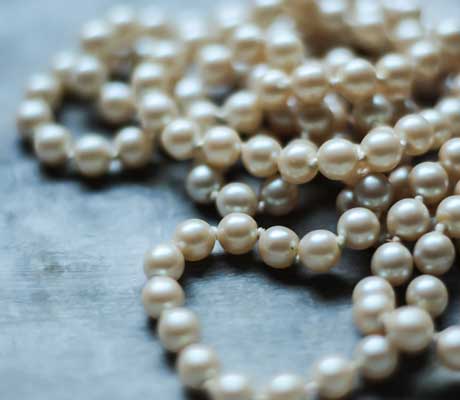 Natural pearls are extremely rare and difficult to acquire. As a result, they're also very expensive. Natural pearls cater to a special segment of people who truly value the finest of all things and appreciate and admire the rare beauty of a natural pearl.

Why are these pearls so rare? Only about one in 10,000 oysters in the wild - not cultivated on a pearl farm - will produce a pearl. Of these natural pearls, only a small percentage will achieve the size, shape, and color that's desirable for use in pearl jewelry.

Waiting for natural pearls to mature requires patience as well. A 4mm natural pearl can take an oyster six years to produce! A pearl forms when an irritant gets inside the oyster’s shell. To protect its delicate body from the irritant, the oyster secretes a substance called nacre to surround the irritant. The oyster never stops secreting nacre, so over the years the nacre layers build up to form a genuine pearl, composed entirely of nacre without human intervention of any kind.

Natural pearls are not judged by the same standards used to judge cultured pearls. They generally will not be as large as today's cultured pearls. Any one natural pearl in a matched strand will command a cost of 40 to 60% more than a cultured pearl of comparable quality. Their history not only makes up for their small size but also adds to their allure, which is why natural pearl lovers will go to great lengths to find them for sentimental jewelry pieces.

Natural saltwater pearls are harvested from two species of oysters: the Pinctada radiata and Pinctada margaritifera. The traditional source of natural pearls is the area around the Persian Gulf or the Gulf of Manaar in Sri Lanka. Through the 1950s, 70-80% of all pearls came from this location. Sometimes natural pearls are also referred to as "Oriental pearls", due to their origins.

The most well-known saltwater cultured pearls are Akoya, Tahitian, and South Sea. Most pearl farmers today who produce these cultured pearls cultivate oysters over the course of many years. These farmers must also ensure the oysters remain healthy during that period of time. When it's time for the pearl to be harvested, the farmer sends the oyster to a harvester who carefully removes the pearl. Even though these pearls aren't natural, the Akoya, Tahitian, and South Sea pearls can still be very valuable and expensive. In fact, South Sea Pearls are the most prized cultured pearls in the world. Did you know that a strand of Tahitian pearls can cost up to $25,000?

Originally native to Japan, Akoya pearls are recognized around the world as the classic cultured pearl. They are the most beautiful and lustrous of all cultured pearls due to their consistent roundness and bright reflective luster, two qualities that make them the perfect choice for a custom pearl necklace. These pearls are either white or cream with slight color variations.

According to the Cultured Pearl Association of America (CPAA), Japanese Akoya Cultured pearls "are the most lustrous of all pearls found anywhere in the world. In recent years, China has been successful in producing Akoya pearls within their own waters. However, at this time they are unable to produce as brilliant a luster as high quality as Japanese Akoya cultured pearls."

The Japanese waters in which Akoya pearls grow are considerably cooler, 10 to 15 degrees cooler, than those grown in warmer climates, where other types of saltwater cultured pearls are grown. The cooler conditions cause Akoya pearls to develop their nacre coating more slowly, and with a more compact crystal structure. This is what increases Akoya pearls' reflective and refractive qualities. In addition, Akoya pearls are bead-nucleated, and generally only one pearl at a time can be grown. 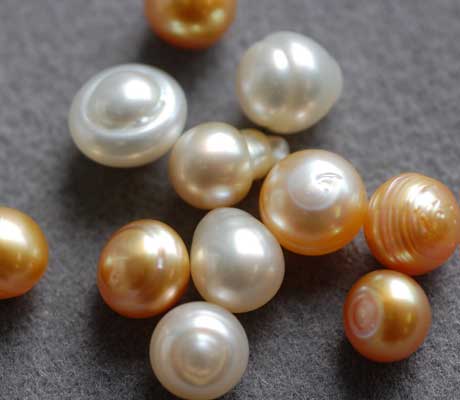 South Sea pearls are among the most expensive cultured pearls in the world. Generally larger than other pearl types, they have a unique luster and soft reflection that results from the large aragonite platelets that make up the pearl.

Typically, these pearls are harvested between 8 to 20 mm, and the average size is 12 mm. Some extremely rare South Sea pearls have even measured larger than 20 mm in diameter. Only about 10-30% of each harvest will produce round or near-round pearls, so a full strand with round matched pearls is a luxury. Baroque and drop shapes of South Sea pearls are also often featured in designer fine jewelry.

The Pinctada maxima oyster produces South Sea cultured pearls, which they take two to four years to develop. They're sometimes referred to as "golden", while silver, white, and yellow are the most common color variations.

Another type of saltwater cultured pearl, the Tahitian pearl is grown in the Pinctada margaritifera oyster, which is usually between 6 and 12 inches in diameter and can produce large pearls, ranging in diameter from 8 to 18mm.

Tahitian pearls are known for their dark hues, including eggplant purple and metallic gray. One reason why Tahitian pearls are so valuable is because they're especially difficult and costly to produce, since the Pinctada margaritifera oyster is sensitive to the culturing process.

These pearls are native to French Polynesia but are also farmed in the Cook Islands, Fiji, Australia, and New Zealand. They get their name from the fact that they are primarily cultivated near the islands surrounding Tahiti, which is the largest island of the Windward group of the Society Islands in French Polynesia. 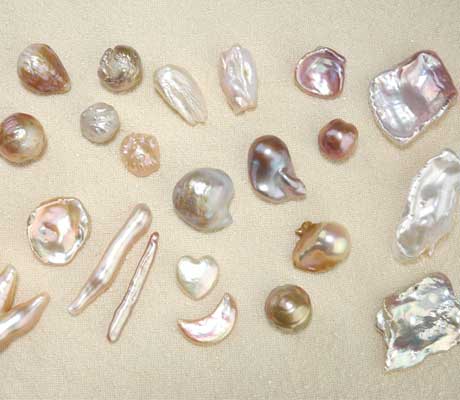 Freshwater pearls can be found in bays and rivers throughout the world and can easily be cultivated from freshwater mollusks in China, Japan, and the U.S. However, the majority of cultured freshwater pearls are produced in China.

Generally more affordable than cultured saltwater pearls, freshwater pearls can vary widely in color. In terms of size, they tend to be between 2 and 13 mm. .

Freshwater pearls are grown within mussels. Within each host, 10 to 14 pearls can be harvested at once. Therefore, the outcomes are often unpredictable. Additionally, freshwater pearls will form with a lower amount of organic material in their nacre, resulting in a "glassier" luster.

We're proud to offer two types of these pearls for our personalized pearl necklaces, which make perfect milestone gifts. If you're interested in building your own natural pearl or Japanese Akoya cultured pearl necklace, you can visit this page to get started.