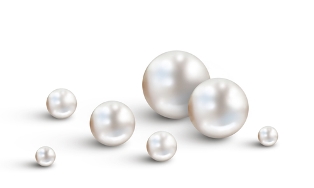 Once upon a time, Pierre Cartier had a pearl necklace. It took him years to assemble all the big beautiful Oriental Natural pearls. This was long before the time of cultured pearls. Daisy Plant wanted the necklace. Although, her husband was very rich, she couldn’t afford to spend $1.5 million, which is what Mr. Cartier wanted.

Then, one evening she met Mr. Cartier at a dinner party. He told her she could have the pearls in exchange for her house, which was on the corner of Fifth Avenue and 52nd Street. Like the heroine of a fairy tale, she made the bargain and went with her pearls to live happily ever after.

Oriental Pearls, also often called Bahraini or Genuine Pearls, are the world’s most precious gem and continue to break world record prices in both the Middle-east and in the west. Natural pearls have been prized for their beauty and rarity for more than four thousand years.
These wild pearls grown naturally in the Pinctada Radiata pearl oyster ~ a small oyster found throughout the Persian Gulf, the eastern Mediterranean Sea, Red Sea and the Indian Ocean

These natural ocean pearls can be up to 7 mm in size. The pearls of this oyster are historically important natural pearls.

Natural gulf pearls are among the finest in the world and are still found today in the many countries that surround the gulf such as the United Arab Emirates, Iran, Kuwait, Saudi Arabia, Bahrain, Qatar and Oman.

Natural Pearls are extremely are. Only one in 10,000 oysters will produce a Natural Pearl and of those only one in a million will be gem quality. Only about half of 1 percent of the world’s pearls are Natural.

Natural pearls are formed without the intervention of any kind which differs from cultured pearls that are started by the intentional insertion of a nucleus. Natural pearls are composed entirely of nacre, a combination of aragonite and an organic binder called conchiolin.  In an effort to protect itself from an intruder, the oyster coats itself with layers of nacre, also known as mother-of-pearl, the same substance it uses for shell building. Like all mollusks, pearl oysters react to foreign objects that lodge against their soft inner body where it cannot be expelled.

In a completely natural state, only a very small percentage of mollusks will ever produce a pearl and only a few of them will develop to a desirable size, shape, and color. It is commonly assumed that one in ten thousand mollusks naturally produce gem quality pearls meaning it will be round and blemish-free. Consequently, natural pearls are extremely rare and valuable especially in large sizes. Unlike cultured pearls which are cultivated in larger quantities, Natural pearls cannot be produced. They are formed by chance –one of nature’s miracles.

Latitude, meteorology, sea conditions, nature of plankton in the surrounding area, soil of the ocean floor, genetic origin of its mother, and the health of the oyster all determine the quality of a pearl.

From the list of gemstones born of the earth, it is the Natural Pearl, from the sea, that many find spectacular. Perfect at birth, its natural beauty needs no improvements.  Natural Pearls have an inner glow, rather than gleam and their qualities are far more subtle than the sparkle and shine of faceted gemstones. When light strikes the surface of a natural pearl, it refracts into a play of colors. The delicate play of colors, depend upon the perfection of the pearl’s surface, causing light to reflect from overlapping platelets of aragonite. The iridescence comes from the light striking at different angles from the rippled layers.

What's the Difference Between Natural and Cultured Pearls?