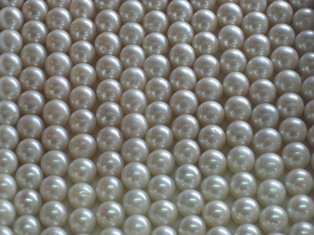 -          Considered the most beautiful and lustrous pearls in the world. Aloya pearls are prized for their perfect roundness and mirror-like luster.

-          Akoya pearls are the classic pearl. They are the traditional type of pearl most people think of brides wearing on their wedding day.

-          Akoya pearls are grown in the oysters and named after the oyster in which they are grown, whose scientific name is Pinctada fucata martensii.

-          Cultivated for quality, they are usually harvested one pearl per oyster; therefore they are rarer than their freshwater counterparts.

-          The Akoya oyster is not especially large, typically producing pearls ranging from 2-8mm and occasionally found in sizes up to 10mm.

-          Saltwater (Akoya) pearls are bead-nucleated which begins with a rounded, polished piece of mother-of-pearl shell which is embedded into the mollusk along with a piece of mantle tissue. Over time, the mollusk secretes a coating called nacre around the nucleus.

-          Freshwater pearls are nucleated by inserting a small piece of mantle tissue from the mollusk between the mother-of-pearl linings of the host mollusk.

-          Produced in large quantities. Freshwater pearls can be cultivated to produce up to 50 pearls per mussel which makes them abundantly available.

-          Freshwater pearls, while attractive, typically do not achieve the same luster or roundness as saltwater pearls.

-          Pearls produced early on were mostly rice shaped. Later, potato shapes were produced and more recently near-round to round.

-          Freshwater pearls can be cultivated to produce larger sizes than saltwater. Today they can be found in sizes 12mm and larger.

Learn more: What's the Difference Between Natural and Cultured Pearls?

What Are Natural Pearls?