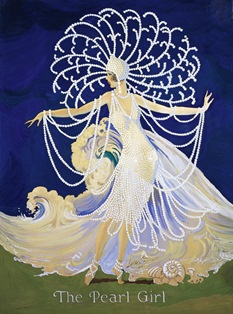 History is replete with pearls being associated with great wealth and power. Where you found one you found the other. A complete history of famous pearls is the subject of a book not a blog. However, we can take a glimpse at some famous people and their pearls. At a later time, we can return to this subject and view other famous pearls anew.

One of the most famous of pearl stories involves the Egyptian Queen Cleopatra and Roman General Marcus Antonius. The historian Pliny, in Natural History, told us the story. Some of it may be apocryphal but it is certainly interesting.

Cleopatra and Mark Anthony: These two historic greats met and their cultures did too. Attracted to each other and in political need they dined together. Cleopatra wore a pair of pearl earrings made of the then largest pearls known. She removed one and dropped it into a cup of vinegar. It dissolved and she drank it. Mark Anthony was greatly impressed. Pearls were held in great value by the Roman Empire and here one was dissolved and drank.

The precipitation of such an action was called a magistry. Cleopatra’s toast to Anthony was considered an aphrodisiac. Perhaps it was.

Later, they both suffered tragic suicidal deaths related to each other. A horrible end to a grand pearl drink.

A look at some other famous people and their pearls.

Queen of England, Anne Boleyn: Anne Boleyn was King Henry 8th second wife. He was greatly smitten by her. Sonless by his marriage to Catherine of Aragon he had their marriage annulled and married Boleyn. It was a short tumultuous one.

Boleyn was extravagant by nature and she surrounded herself with the finest of all things available. She was a great lover of pearls. A royal portrait of her shows her wearing a rope (over 37 inches) of large natural pearls and a gown festooned with real pearls. Pearls as part of royal clothing became quite popular. Boleyn’s daughter, Queen Elizabeth 1st, had over 3000 dresses decorated with real pearls.

Unfortunately for Queen Anne, she was accused of infidelity and plotting against King Henry. No pearls could save her now. In 1536 within the Tower of London’s walls she was beheaded.

Mae Plant and Louis Cartier—5th St. and East 52nd St., New York City: In Paris in 1847 Louis Cartier founded Cartier company. Cartier was a favorite of the wealthy and the royals. King Edward 7th of England once said of Cartier: “the jeweler of kings and the king of jewelers.” They were the finest.

In 1915 in New York City, Cartier wished a location on 5th Avenue. One was available. Formerly owned by Vanderbilt, the mansion was currently owned by Morton Plant a railroad tycoon’s heir.

Louis Cartier possessed a rare Oriental (natural) pearl necklace. It was double stranded and had been exhibited in Paris, London, and New York City. Morton’s wife, Mae, set her sights on this necklace. She wanted it. The necklace was valued at $1.2 million.

Plant purchased the necklace for $100 and the New York property. It was a regal sum and deal and Mae looked quite regal wearing the necklace.

Diana, Princess of Wales Swan Lake Suite: Tragically, this necklace made for her by the Crown Jeweler, Garrards in 1997, was the last to be worn by her to an official engagement.

Diana loved pearls—they were her favorite gem. She made use of them whenever she could. Famous photos of Diana wearing pearl chokers are found easily. Pearls were part of her life.

The necklace is fitting for Diana. It is beautiful without being ostentatious. It carries a quiet regalness to it. It is simple and complex at the same time.

The Swan Lake Suite consisted of a necklace and matching earrings. The earrings were not finished until after her death.

From Cleopatra to Diana a good deal of history is covered. One thing all the years mutually include is the love of pearls by the famous. Today, we can enjoy the joy of pearl ownership. Your family’s pearls can be worn with pride!